Research by Den Brok reveals the immune response associated with ablation. Cancer ablation functions like a “tumor vaccine.” It works to release your body’s immune response.

Ablation functions differently than a typical vaccination approach. Traditional vaccinations inject a “killed” or weakened disease-causing agent into the body. Ablation actually “kills” the tumor from within and prompts the body’s immune system to target any additional cancer cells.

Studies demonstrate that ablation has greater potential to eliminate cancer than treating local tumors with surgery. The risk of death from cancer spreading (metastases) is reduced. Ablation is also an alternative to chemotherapy.

The immune response produced by ablation, combined with immunotherapy support such as Yervoy, Opdivo, and Keytruda, can create a strong and effective immune response. The results are revealed to eradicate cancer in the targeted area and even beyond the specific location.

Using Your Body’s Resources to Eliminate Cancer with Cancer Ablation

These drugs are also approved and useful for intravenous use. This enables your entire body to be treated.

Researchers (Marabelle and Den Brok) have discovered that direct treatment into a cancerous tumor is more effective than treating the whole body. This is due to immune dysfunction that occurs within the tumor.

A new approach to cancer treatment has been created. Therapies now target and attack the tumor directly.

Think of it as “precision medicine.”

“Poisoning” or treating the whole body is typical with most cancer therapies. This approach bypasses your body’s unique ability to learn how to fight cancer.

Your body will rely on certain medicines or therapies to combat cancer. When the medication is no longer being used or resistance to it is developed, cancer can progress.

The key: use cancer therapy that teaches your immune system how to fight cancer!

Your immune system is capable of learning. It also has a memory. This explains how vaccination can fight disease now and when you’re exposed years or decades later.

Immunotherapy and ablation for cancer treatment works this way too. Ablation eliminates cancer within the tumor. Any remaining, non-viable cells stimulate your immune response.

Drugs like Yervoy, Opdivo, and Keytruda release the immune system to attack the non-viable tumor. This trains your immune mechanism to attack cancer if it exists in other areas of your body as well.

The combination of ablation and immunotherapy within your tumor (Yervoy, Opdivo, and Keytruda) create a highly effective anti-cancer immune response. Cancer is attacked and defeated beyond the site of direct treatment.

Immunotherapy combined with image-guided cancer ablation creates a more substantial anti-cancer immune response than either one working alone. This cancer counter-attack is considered one the “greatest advancements” in cancer treatment.

You can expect three to five times greater increase in cancer survival by adding ablation to immunotherapy rather than immunotherapy alone!

Credit goes to the use of improved anti-cancer immune checkpoint inhibitors like:

Ablation destroys the tumor within the body. The release of tumor particles (antigens) enables other similar particles to be recognized and attacked by your body’s immune system.

Other substances are also released. These combined with tumor antigens and immune checkpoint inhibitors (Yervoy, Opdivo, and Keytruda) create a near-perfect mix of immune stimulation.

The result: a significantly more powerful anti-cancer immune response. One that’s unprecedented for stimulating your immune system to battle cancer throughout your body.

You have another breast cancer treatment option besides a mastectomy or a lumpectomy. Image-guided cryoablation gives you many advantages for treating breast cancer.

Dr. Willams provided the one of the first breast ablations by RFA in 2003. He followed with cryoablation in 2004. Patients treated were seeking treatment solutions beyond surgery or were facing advanced disease while having an untreated breast tumor. 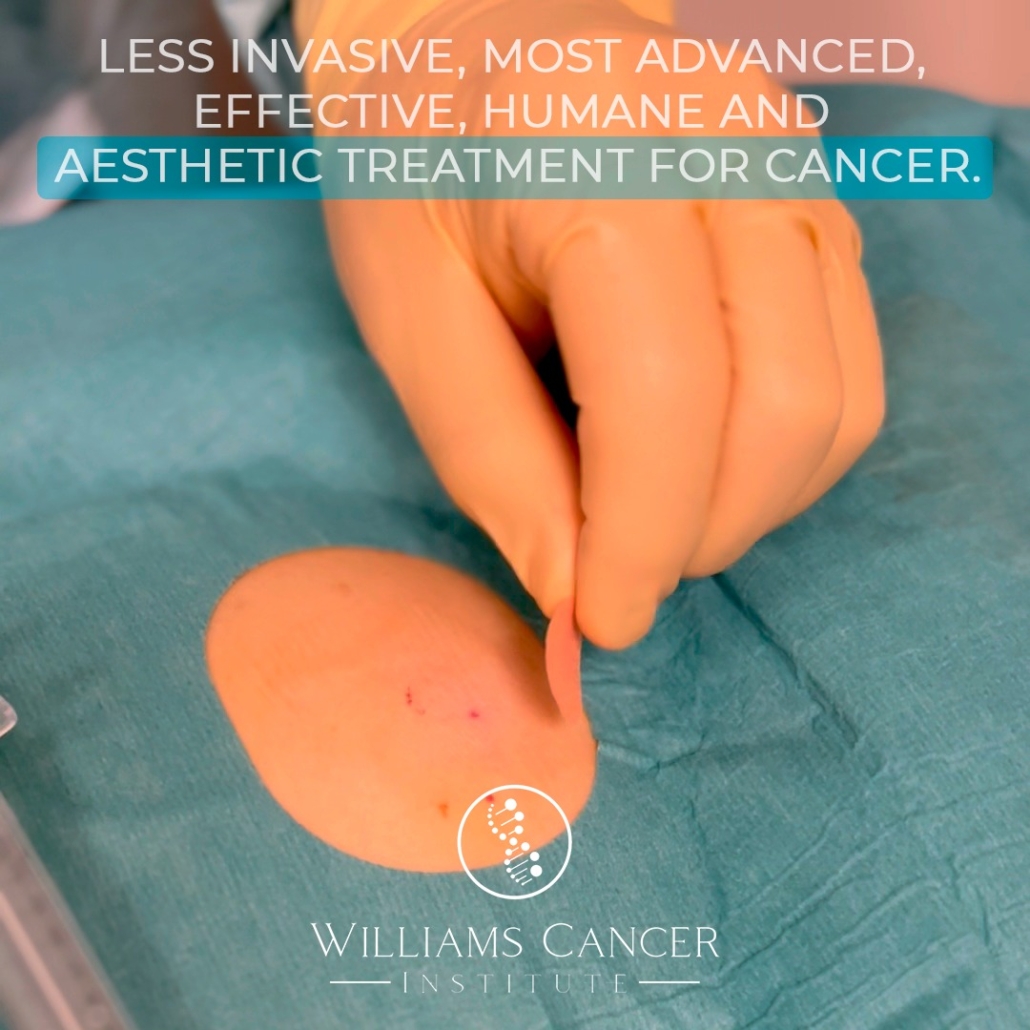 At Williams Cancer Institute all our treatments are minimally invasive and highly technological. We work with a specialized needle guided by diagnostic imaging means, which allows us to reach the tumor directly without generating large cuts, scars or burns on the patient’s body, in this way, reducing the risk of bleeding and infection and drastically improving the aesthetics of the treatment. during our intratatumoral immunotherapy, cryoablation and Galvanize Aliya pulsed electric field ablation therapies. In this way, we offer the patient greater satisfaction in optimal results in recovery after their procedure and emotional and physical stability. That is why at Williams Cancer Institute we provide the immune system with the most effective tools, which are capable of identifying cancer in order to attack it directly, creating an immune response to attack other types of tumors that have not been intervened. This cancer treatment is less invasive, more advanced, effective, humane and aesthetic against cancer.

Intra-Arterial Infusion of Immunotherapy uses the tumor’s arterial supply to provide direct access of higher medication amounts with less dosage to the patient. This is especially valuable to certain tumors such as those within the liver.

Yervoy, Opdivo, and Keytruda (immune checkpoint inhibitors) are combined with an oil-based substance for slow release. These can be infused directly into the artery of the tumor. Immunotherapy can replace chemotherapy.

Intratumoral injection of OX40/CpG agonist made world news early 2018 for curing all mice, even in difficult tumor models, as published from Levy at Stanford (Stanford Cancer Vaccine). Though we know treatment in humans is more challenging, this therapy offers an excellent option that may be superior to other approved immunotherapy. We already had been doing similar work. Currently we are performing this treatment outside the USA. OX40 agonist activates a receptor, which stimulates T cells. In addition, it seems to have another mechanism where it decreases T regulatory cells, which can further enhance the anti-cancer immune response. CpG is a single stranded DNA activating an initial immune response through the TLR-9 receptor. This may help attract immune cells to the tumor environment, which can help overcome some of the main reasons typical immunotherapy fails. As with most immunotherapy, it is the correct combinations that have a higher success.

To determine if you are a candidate for one of our cancer treatment procedures, please contact 1-954-530-4606. We will need to see copies of the most recent medical records and imaging studies. We provide a review of these records at no cost; however, please do not send original documents as they will not be returned.

Your Body’s Unique Cancer Fighting Solution with Immunotherapy. Image-guided cancer ablation targets the tumor from within it. PEF destroys tumors with a nanosecond electrical pulse that causes an immune response. This combined with intratumoral immunotherapy creates an unprecedented synergy stimulating the immune system to attack the cancer, not just locally, but globally as well.